You are here: Home / News / Designer Contracts scoops 2 awards for 2019

Designer Contracts has been named ‘Take Back Partner of the Year’ for the fourth time by Carpet Recycling UK (CRUK) at the annual awards and conference held at Edgbaston Stadium in Birmingham.

National Distribution Manager, Glenn Mitchell, who made a presentation at the CRUK conference about the company’s recycling initiatives, was also named ‘Recycling Champion of the Year’.

Designer Contracts also won the award in 2015, 2016 and 2017, so to win again for a fourth time is a fantastic achievement.
The company’s ‘Take Back Scheme’ works by diverting 90 percent of unfitted carpet waste through working closely with dedicated waste recycling solution companies who convert it into a onward re-usable sustainable resource such as the Equestrian sector.

In addition to the ‘Take Back Scheme’, the company has invested heavily in its equipment, which includes a £40,000 baling machine that helps to recycle over 70 tonnes of cardboard as well as second bespoke bailing machine for over 20 tonnes of plastic each year. Its transport fleet has also been carefully considered to reduce impact on the environment where possible, utilising aerodynamic ‘teardrop’ trailers which can reduce fuel consumption and emissions. The company also attained Fleet Operator Recognition Scheme (FORS) accreditation, which is given to businesses that ensure its vehicles are driven in a manner that minimises fuel consumption and emissions. As well as carrying out industry standard best-practice checks.

From January 2019, Designer Contracts have begun to record and detail all of its returned recyclable waste from its 15 regional centres across each side of the UK. By doing so, they have been able to see a regular pattern in volume, how often, where from and that allows them to gage fully how many onward bales they will create daily / weekly / monthly. That information has become unique to them and of great value as it enables the company to negotiate better arrangements with their onward incumbent recycling affiliates with accurate answers of their outward supply. By doing so and also running a weekly routing schedule from their National Distribution Centre, in Kettering, they are able to understand where their bales can fit and slot in to their existing routes with the knowledge of when they will create certain amounts of recyclable carpet waste bales. Having now found an outlet in the same county as their existing customers and suppliers, they can bolt on to their route with additional revenue gained from weighed in rebates from the destination point under its agreement. So long as Designer Contracts continues to record and detail their recycling waste, they have great future potential in always finding the best possible solution and turning “waste” from being a distraction commodity against their core business activity to something which complements and helps its deliveries and growth for the long term future.

The success in implementing new routing deliveries based on accuracy with production of bales has attracted revenue which now helps Designer Contracts look at making new options with their regions to schedules of when they can deliver. It has opened up new ideas and they are able to save time in staffing through knowing when they need to have loads ready for outward shipping based on the arrangement with their new recycling outlet. 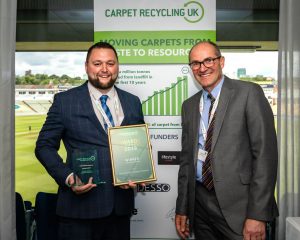